The Phase V renovation is designed to be the definition of mixed-use, paving the way for 21st-century businesses in a century-old building. The campus is comprised of multiple buildings that total over 4.5 million square feet, with Phase V measuring 500,000 square feet of the more than two million square feet in Building A. Each of its eight, football field-sized floors have been re-designed for maximum flexibility for future tenants, both small startups and large, established businesses.

Our team led the full-scale building modernization efforts that included core and shell infrastructure improvements and interior modifications that create spaces within Brooklyn Army Terminal for these tenants, working closely with Hunter Roberts Construction Group to balance design with a schedule-conscious construction process.

Designing for Multiple Tenants of Many Sizes

The key design element of this project was flexibility. As a space designed for small business and startups–the only way up is growth. Phase V needed to be able to accommodate growth in an efficient, flexible manner. To keep leasable space up, and maintain maximum space planning flexibility, all building systems are engineered to feed the spaces from the roof. Views of New York Harbor and the Statue of Liberty were opened up to each floor by minimizing the need for louvers to overtake the historic façade of Building A.

With all building services consolidated to the core, the floor plates are free to house up to ten tenants. New stair towers and bathrooms are placed strategically to accommodate various multi-tenant layouts without the need to change infrastructure. Essentially, we future-proofed the Brooklyn Army Terminal so it can/ serve the Sunset Park neighborhood for the foreseeable future with minimal ongoing costs. 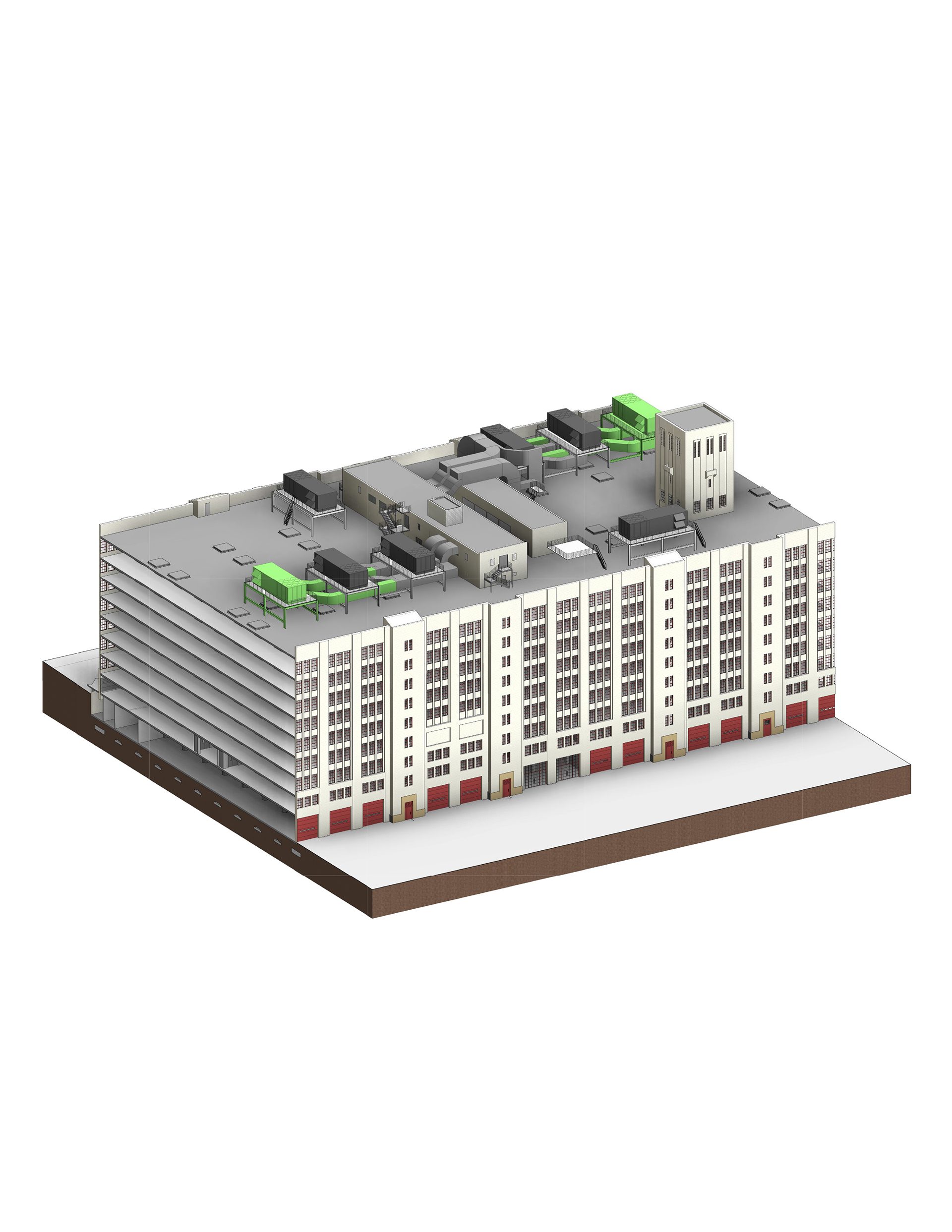 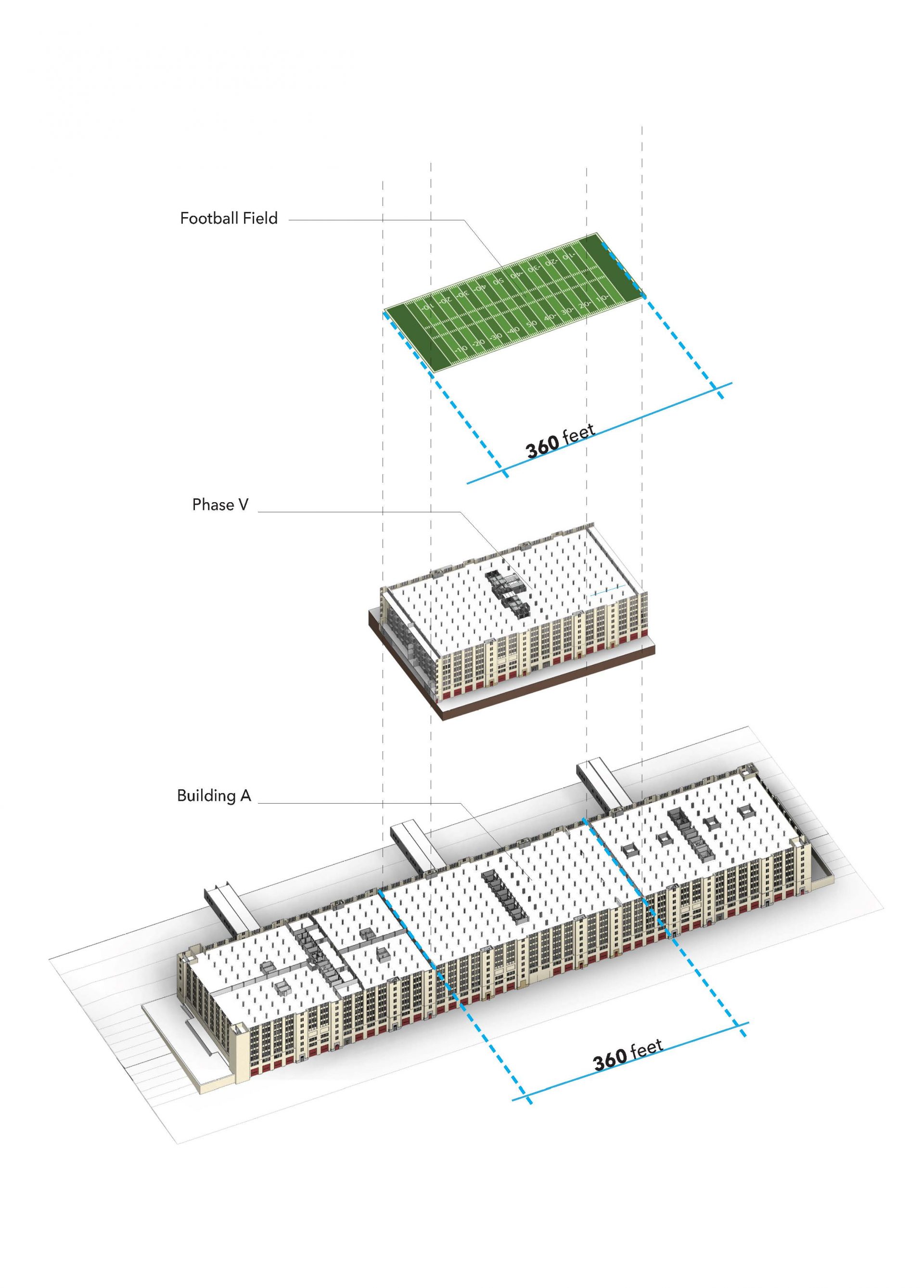 In manufacturing, a vital component is circulation and logistics. A company could have the best product in the world, but if they can’t receive, produce, and ship the product in an efficient manner, their company will suffer. We worked with consultants to conduct numerous traffic and circulation studies to verify the volume of goods that could successfully be transported via vertical circulation (elevators) and shipped through the loading dock with minimal congestion.

Our team’s design for the layout of this logistics space provides designated lanes for forklifts, keeping it separate from pedestrian areas. Tenants use cordoned-off areas for staging, the space was designed to flexibly accommodate large shipments or small shipments, depending on the need of the business.  Now, instead of moving troops and supplies, the Brooklyn Army Terminal has the capacity to move products like ice cream cones, electronics, machine parts and other goods in a timely, efficient process. 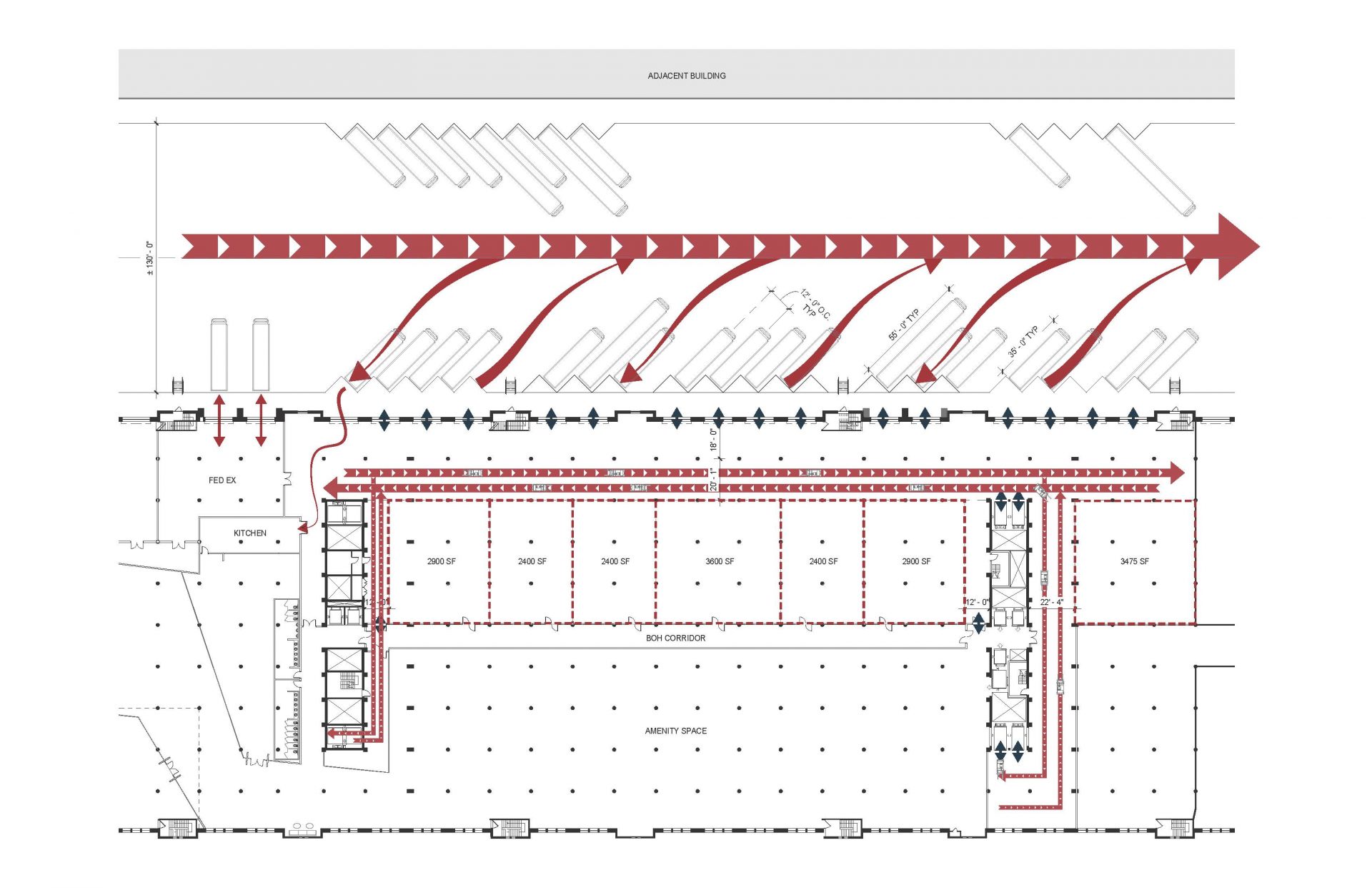 Our design for Phase V emphasizes Brooklyn Army Terminal’s historical details. Through coordination with the State Historic Preservation Office (SHPO) we were able to successfully restore over 800 windows that provided modern day energy efficiency while maintaining the historical integrity of the building. The project demanded manufacturers and designers to work together to develop details like the custom, slim-profile, aluminum frames which were fabricated to maintain historic site lines. The color of the windows is even designed to match the original by curating a custom paint color from Benjamin Moore, newly named “Brooklyn Red.” 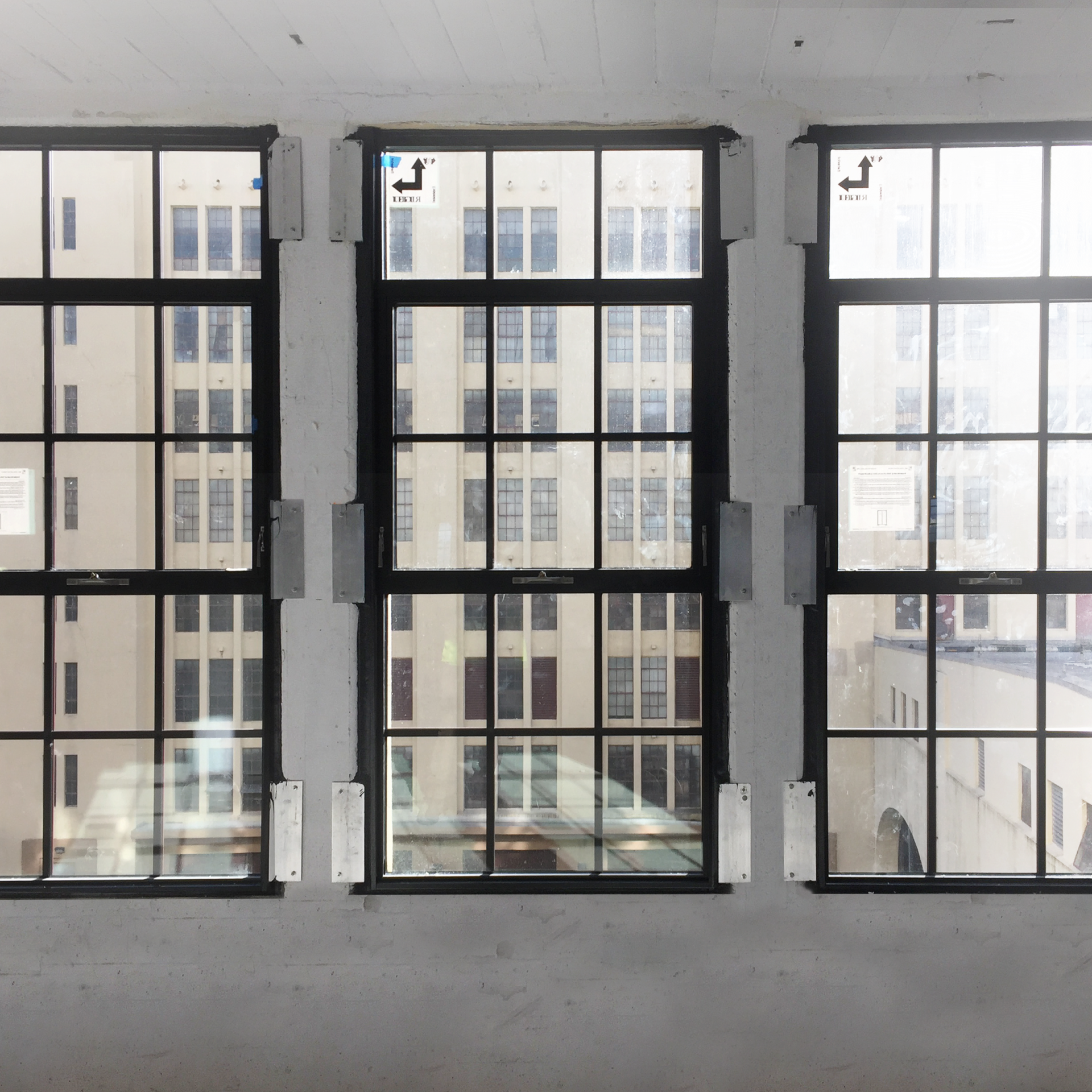 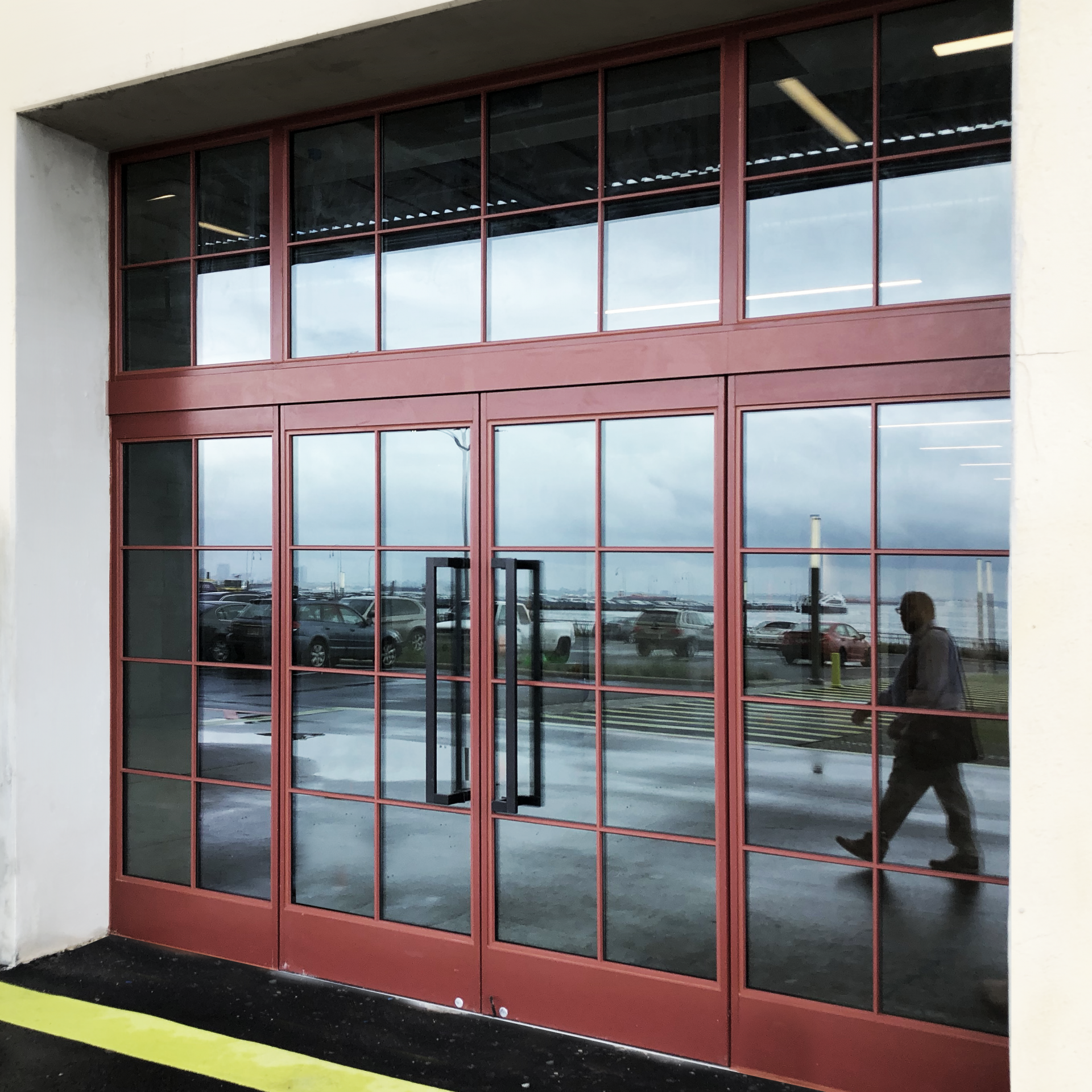 The way work was carried out on site was carefully designed. Our goal was to not interrupt daily activities while clearing out decades’ worth of hazardous debris. To achieve this, we developed an aggressive multi-filing strategy and schedule that separated demolition, abatement, window, and tenant work to different submissions so that, even without a completed design, work could begin and remain on schedule. 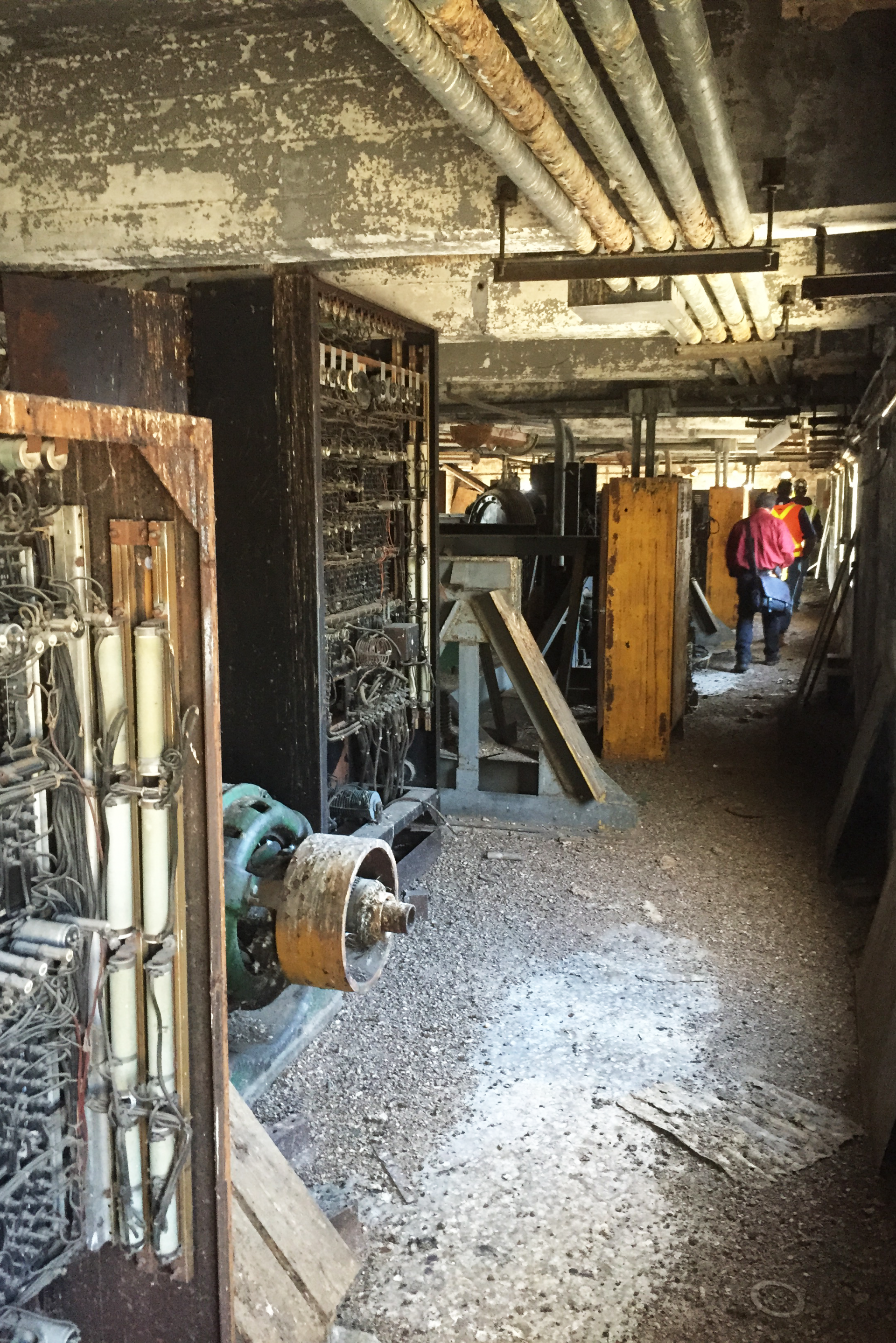 The Phase V revitalization was completed in tandem with other campus-wide capital improvement projects that activate the Brooklyn Army Terminal’s vibrant waterfront for access by the public. With views of the Statue of Liberty, Downtown Manhattan, and the New York Harbor, visitors from across the city now have access to a unique neighborhood asset and new community space, thanks to a new NYC Ferry stop at the campus’ pier.

It’s expected that the Phase V renovation at Brooklyn Army Terminal will create up to 1,000 new jobs, substantially impacting New York City’s small-business economy. So far, the site has been recognized by the Brooklyn Chamber of Commerce as a 2019 Best of Brooklyn Award recipient, for Industrial Modernization. 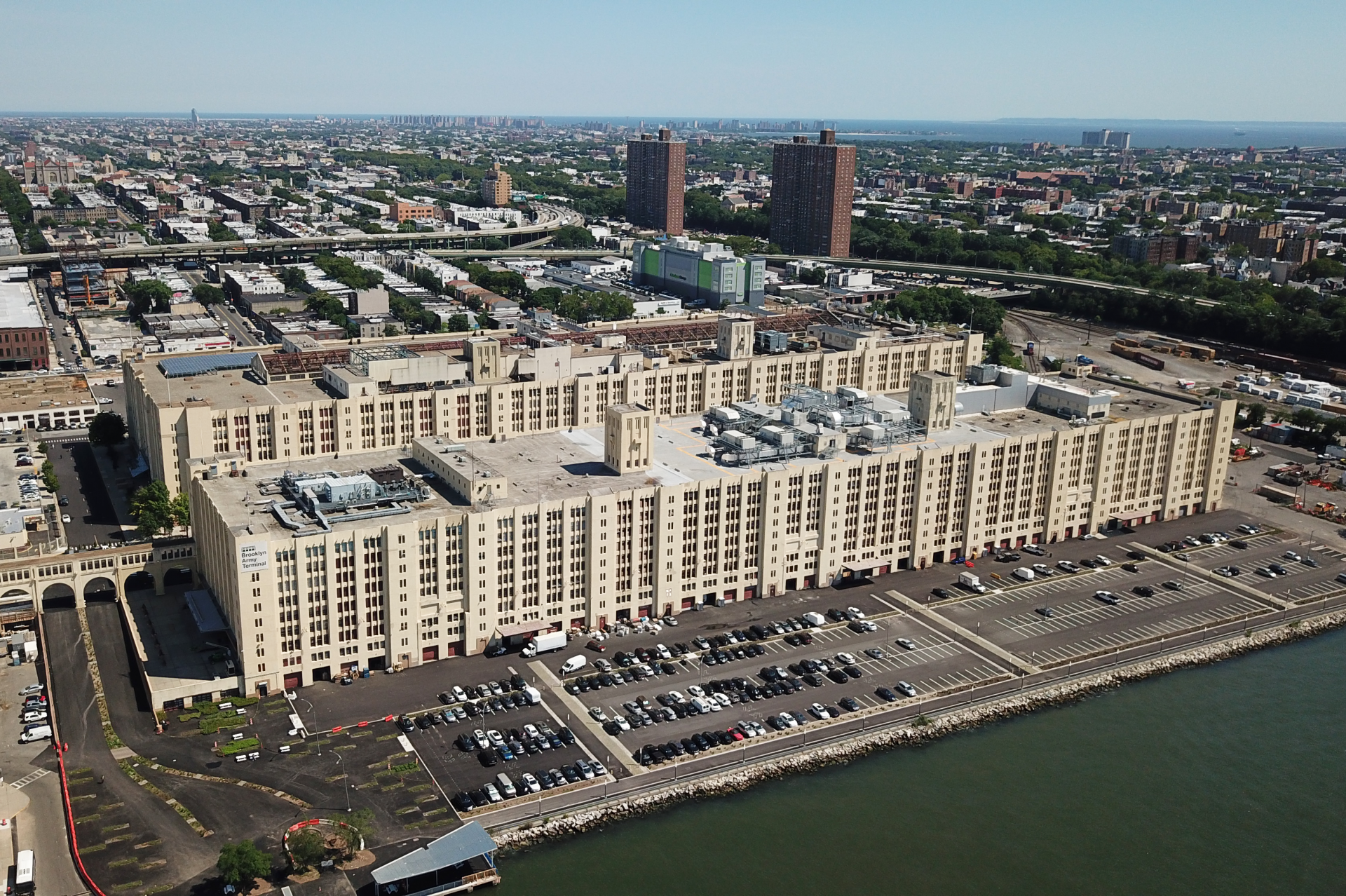